The 2019 TCMUN keynote speaker was former U.S. Ambassador Gary Grappo. Ambassador Grappo presented a FREE public lecture on international diplomacy in an era of increasing international isolationism at 7:00 pm on Sunday, November 10, at the Center for the Arts. 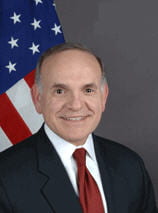 Gary Grappo is CEO of Equilibrium International Consulting, LLC, having founded the company following a distinguished career in public and foreign policy and in the private sector. Ambassador Grappo is a career American diplomat (retired). His diplomatic postings are marked by some of the late 20th and early 21st centuries most difficult foreign policy challenges, from Nicaragua and the “Contra” War to the fall of the Soviet Union and the many crises of the Middle East. His experience includes: post-9/11 actions to combat Middle East terrorism, re-building of US-Saudi ties after 9/11, leadership of the political affairs division at the U.S. embassy in Baghdad, Iraq, and coordination of efforts to help resolve the Mideast’s most enduring struggle, the Israeli-Palestinian conflict. His postings included Nicaragua, Portugal, Jordan, Oman (twice), Saudi Arabia, Iraq, Jerusalem and several in Washington, D.C.

Ambassador Grappo received numerous awards during his Foreign Service career, including: the Secretary’s Career Achievement Award and the Senior Foreign Service Presidential Award for his ambassadorship in Oman. Following his retirement, Ambassador Grappo served as president and CEO of the Colorado-based public policy and mediation NGO, the Keystone Center. He was Visiting Senior Scholar at the Center for Global and Area Studies of the University of Wyoming, and has been a Distinguished Fellow in the Center for Middle East Studies of the Josef Korbel School for International Studies at the University of Denver since 2015.

Ambassador Grappo is a former commissioned officer in the US Air Force and spent several years with Castle & Cooke (Dole Products) and Bank of America in its Latin America operations. He earned a Bachelor of Science degree from the US Air Force Academy, MS degree from Purdue University and MBA from the Graduate School of Business at Stanford University. He is married to Rebecca Grappo.