Below is a general guide to help student delegates prepare for TCMUN.

Learn the TCMUN Rules and Expectations:

Learn the basics about your country and the UN, including:

Websites to aid in UN and country research: 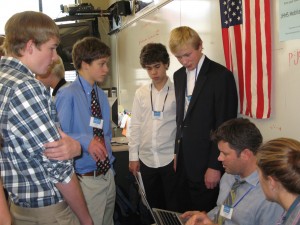 Delegates from TCMUN ’10 during an unmoderated caucus

Research the Topics on Your Committee’s Agenda

It is very important to research your country’s position on the topics you will be discussing in your committee.  This will enable you to write an accurate position paper and draft resolutions that your country would actually support.  Excellent sources include:

In both the UN and Model UN, it is vital to know your allies.  This allows you to form groups to co-sponsor resolutions, negotiate as a team, and vote as a bloc.  Often countries from the same region vote as a bloc.  Other times, voting is more issue-specific.  So, as you research your country, the UN, and the topics before your committee, think about which countries are like yours (culturally, economically, politically, and otherwise), and make a note of any alliances and other forms of cooperation you discover.  For information on some UN blocs, go to http://cyberschoolbus.un.org/infonation3/glossary.html

Use our helpful Position Paper Writing Guide for Students to get started on you paper.

Current Periodicals and Other Information Sources

Remember that it’s always best to consult several sources.  Reliable US newspapers include the New York Times, the Washington Post, the Los Angeles Times and the Wall Street Journal.  The journals Foreign Affairs and Foreign Policy are also excellent.

International sources include the Economist, the Guardian (London), Le Monde, (Paris), and ITAR-TASS (a Russian news source). Worldpress.org is another excellent source; it digests international news from media sources around the world.

Radio sources include National Public Radio programs such as “Morning Edition,” “BBC World Service,” and “All Things Considered.”  TV sources include PBS and news shows such as “The News Hour,” “BBC World,” “Charlie Rose,” “NOW,” and “Frontline.”  We especially like “Foreign Exchange” because the guests are international policy makers, journalists, and scholars.  The ABC, CBS, and NBC evening news, as well as ABC’s “Nightline,” can also be helpful.

*The information on this page was provided by Montana Model UN.  It was written by Katie Peers and Karen Ruth Adams and adapted for TCMUN by Evan Huggins.  Copyright 2013 by Karen Ruth Adams.